According to the Microsoft documentation you should have an ADFS Server for each On Premise Environment.

As per my understanding, the reason is related to the workflowClientId that is an hard coded value in  the \Publish-ADFSApplicationGroup.ps1 Powershell script.
Check my post as well.

Due to this reason, in order to use the same ADFS Server you have to add a new Host in the Application definition of the ADFS: 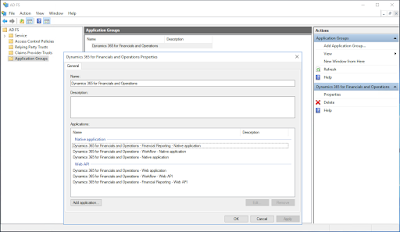 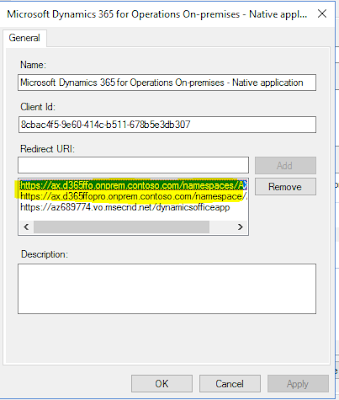 To the same Customer I'm going to install the second On Premise Environment.

During the "Step 18 - Configure AD FS" I had run the following command in order to create the new Application:

I checked the log wrote in the same folder as the script and I notice that the process failed to the script "D365FO-OP\D365FO-OP-ADFSApplicationGroup.psm1” at line 199

Here the "workflowClientId" is set with a fixed ID value.

I guess is a error so, I changed the line in:

Before rerun the script, delete the partial Application created before through the ADFS Management Console

P.S.  The workaround above have an issue, the workflow doesn't work anymore.
Unfortunately, I don't know where, Microsoft Dynamics 365FO search the Fixed Value...
I will create another post in order to explain how to modify the same Application in order to handle also other Environments.

Posted by Denis Macchinetti at 12:41 AM 8 comments:

In order to do that, you have to:

Talking about AIF Web Services or WHS Mobile Portal, in some cases, you have to create also an IIS Farm in order to balance the IIS Connections. If you are working on Azure you have to use the Azure Application Gateway in order to do that.

Posted by Denis Macchinetti at 10:49 AM No comments:

I would like to share some useful links about how to handle the High Availability through AX 2012:

In the next days I will share in detail how to setup the "Services High Availability", in order to balance the WHS Mobile Portal and the AIF Web Services, especially in Azure using the ILB (Internal Load Balancer).

Till Soon!
Posted by Denis Macchinetti at 4:17 PM 4 comments:

As you know, in an Azure Sandbox Environment you can decide if create it with or without Data.

This is not possible when you download the VHD All-in-one machine.

In order to achieve this result from my understanding there are two options:

Posted by Denis Macchinetti at 11:38 AM 6 comments:

In a Business scenario, we can setup several VHD all-in-one box Environments in the same Datacenter for various purpose.
One issue is the standard base URL that usually is https://usnconeboxax1aos.cloud.onebox.dynamics.com/ for all Envs.

In order to change it and allow the team to reach the different Envs, for each Dev Box replace “usnconeboxax1aos” with the desired URL like “XXXXXXX”:

2- Modify web.config files in the C:\AOSService\webroot and replace all standard “url name” entries with the new one (XXXXX)

3- Modify wif.services.config as per the previous step

5-  Change the “hosts” file on C:\Windows\System32\drivers\etc in your Laptop, like:XX.XX.XX.XX     xxxx.cloud.onebox.dynamics.com
where XX.XX.XX.XX will be the IP of the VHD Box
You have to add an entry for each VHD URL Env.

6- As the last step, make the Admin User Provisioning

Posted by Denis Macchinetti at 10:13 AM 8 comments:

Again here with the second part about the D365FO On-premise installation.

Before to Create the AppFabric Cluster, modify the ClusterConfig.json file created before and set the "diagnostics file share" path. This one will be use during the Installation process through all AppFabric nodes.

If during the Cluster installation you raised the error "Request is Invalid" check if the Primary NodeType (Orchestrator) have at least 3 Nodes!

Again, if during the Cluster installation you raised the error "Timed out waiting for Installer Service to complete for machine..."

I played around and I found the first issues.

During the creation of the group managed service accounts (gMSAs) through the Powershell scripts, "Create gMSAs" section, you can raise the follow error: "Key not found"

In this case you have to create a "KDS root key" using the following commands:


During the ClusterConfig.json file generation, you can raise the following error, “Failed to Download Cluster Configuration Template”, see below error.

In this case you have to download the Service Fabric standalone installation package and copy the "ClusterConfig.X509.MultiMachine.json" file into the LCS InfrastructureScripts folder.
Again run the .\New-SFClusterConfig.ps1 -InputXml .\ConfigTemplate.xml command.

Next step is Deploy the Cluster!

About this topic the Microsoft workaround in some case doesn't helped me.
So, below you can find the code that definitely fix the issue!

Modify the StartupPost method of the Application Class and add these two lines:

Posted by Denis Macchinetti at 1:12 AM 4 comments:

For the fourth time I was able to remain MVP on Dynamics AX/365 for Finance and Operations.
Today We Kick Off Our First Annual Award Cycle. Congratulations to all Renewing MVPs!

It is not easy to balance career and remain an technology expert.
I guess that my trick is the passion!

Again is a pleasure stay on touch with the others MVP, meet them, share experiences, etc.

At the end, we became really a good friends!

See you on the next technical conferences, community websites, etc.

Lastly with the release of the Dynamics 365 for Financial and Operations on-premise, I guess we will have a lot of fun in the next months.
Posted by Denis Macchinetti at 4:59 PM 1 comment:

As you know Microsoft have release Dynamics 365 LBD - On premise version.

About Database the main question is use SQL Server 2016 Standard or Enterprise Edition.
Obviously, refer to the Microsoft link in order to check the features supported by the SQL Server editions.

In a medium and not complex Project, my suggestion is to use the Standard Edition.
With the standard version is possible to setup an Always On Availability Group Cluster with a limit of two replicas (Primary and Secondary).

From a Business Intelligence perspective, we can setup a SQL snapshot on the Secondary replica and link to the snapshot the Reporting activities.

Posted by Denis Macchinetti at 10:54 AM 5 comments:

Below some useful links about Dynamics 365:

1- How to select the document management storage location

1- Restricted Admin Access on development VMs with Platform update 12: What you need to know
2- Custom fields: handle with care!
3- How to Install Dynamics 365 for Finance and Operations Platform Update on a Disconnected Local Developer VM

1- COMMON DATA SERVICES (CDS), DATA INTEGRATOR AND DYNAMICS 365, WHAT WILL YOU DO?
2- Integrate data into Common Data Service for Apps

This page will be update frequently!

For this reason Martin Dráb created a custom Solution in order to help us to achieve this result, TFS workspaces in AX2012

This solution is fantastic.
The only issue is when an object is in check-out mode also other developers can modified it also if the check-in can only be handled by the check-out Owner.

In order to fix the behavior I have created a new method and modified another one in the SysVersionControlSystemFileBased Class.

Thanks again to Martin and Stay Tuned!

As you know, starting from AX 2009 was possible to use the SSRS Report instead of the Morphx Reports.

In the last weeks, I faced an issue during the Report Deployment. The error was:

I went through the Microsoft link https://blogs.msdn.microsoft.com/emeadaxsupport/2010/01/20/proxy-settings-can-interfere-dynamics-ax-2009-report-deployment/, but without luck.

Therefore, after some investigation and with help of Microsoft Support, I have fixed the issue.

Below what verify in priority order:

1-      Check if the Antivirus is enabled and in detail the Real-time scan. Disable it or create the relative rules

2-   Update the LanguageTable Table, field LabelFile. Only the languages with 1 on the LabelFile field will be deployed
a.       select distinct LANGUAGE, HELPLANGUAGE from USERINFO

Take care to make a backup of the configuration files before any modification!

Stay tuned!
Posted by Denis Macchinetti at 10:37 AM 1 comment: 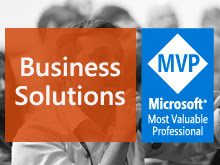 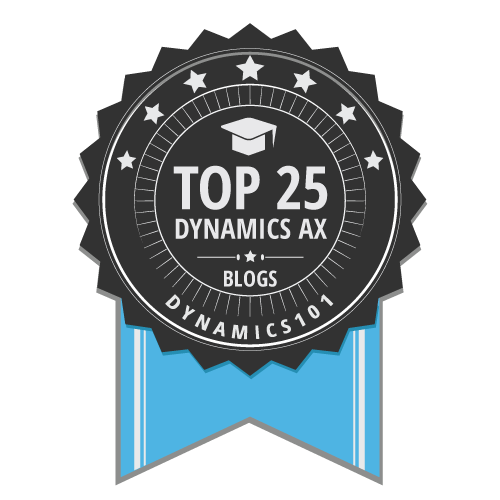